A Ton of Love

When I last posted, I thought I would be making caps and bags for children with cancer.  Children I didn't know, wouldn't know, but children who may be helped or cheered in some small way by the items I sewed.  But life took a very unexpected turn.  One of my best friend's 5 year old daughter was diagnosed with an inoperable brain stem tumor.   Five days later the beautiful, smart, kind and happy little girl, Madeline Elizabeth Musto, became an angel.

Amid the shock and sorrow, the grieving and disbelieving, the support for Maddie's family was amazing.  People locally and from literally across the world who heard of the family's story reached out.  It was like a herd of elephants coming together as a family.  And it was that keen observation by my friend H that was the start of Maddie's Elephants.  She had the idea of sewing stuffed elephants that might help children by having something to cuddle when they were sad or confused.  Elephants would represent the togetherness we all feel in our sorrow and be a tangible way to celebrate Maddie and support her family.  At the start, a goal of making and selling 300 elephants seemed unlikely, but possible and worth pursuing.

H put together a 'sewing bee' of sorts at her church and with three of us sewing as others cut and pinned, we had about 42 elephants ready to stuff and sell by the day's end.  The following day, we launched a web site that was hastily though expertly pulled together with a great deal of help from my husband.   That was Sunday at about 9PM...by Monday morning we had 51 orders.  On Monday we received another 70 orders!  Orders came in faster than we could sew and stuff and we again saw the kindness and beauty of people coming together to help each other.  Friends who didn't know how to sew helped turn the sewn elephants, helped stuff and helped with donations of fabric and batting.


Over 600 elephants have been sold online, at benefit events and through word of mouth.  Elephants are now keeping Maddie's memory alive in 30 states, over 100 cities/towns and at least 4 countries!  And so while I did end up sewing because of childhood cancer, it was for a beautiful little girl I did know.  I feel privileged to be a part of the Musto's lives and to be able to contribute to "the best day evers" that will come from the Maddie's Mark Foundation.  Please visit the foundation's web page to learn more. 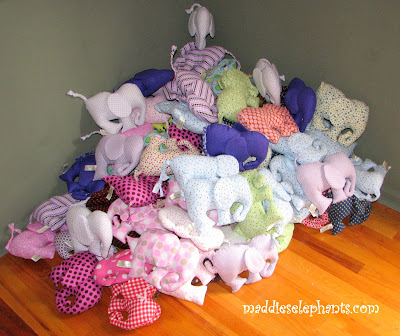