When I took on the mission of creating center pieces for a baby shower (yes the same baby I've blogged about before - we're all so excited!) all I knew was there would be felt involved.  Flowers, pretty and girlie colors and perhaps buckets of some sort crossed my mind and then my idea really blossomed (groan).   I rummaged through the garage and found a roll of rubber covered wire.  I bought it in the Target dollar section a year or two ago expecting to use it for its intended purpose as garden tie wire.  Better use: faux-felt-flowers! 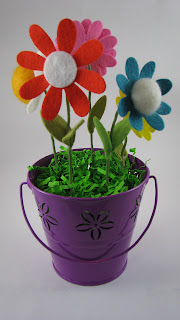 The buckets are from Hobby Lobby (on sale even!)  Again I raided my various stashes and found some floral foam.  I cut chunks with a serrated knife and stuffed them into the buckets. 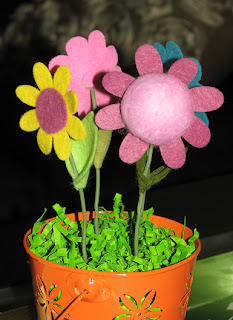 I used my die cutter to cut out several flower shapes, some circles for centers, and some leaves.  I also dug out some small styrofoam balls and cut them in half, then wet felted them to make a few "3-D" centers.  Next step was a lot of mixing and matching and gluing.  Yes, gluing.  GlueCatGlue for this project. 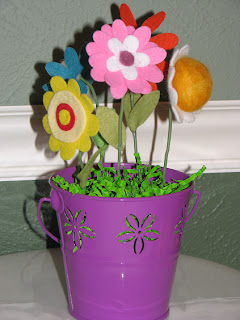 Once flowers were glued to wire stems and leaves were added I worked out my color combinations to balance as best I could among the buckets.  A bit of a bend here and there and then I stuck the stems into the floral foam.   Some shredded paper fake grass finished them off. 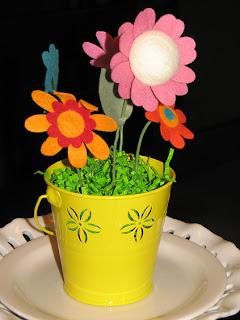 Though I feel like I cheated by gluing, boy howdy that sure makes things faster and easier!  G suggested a Halloween version in black felt with missing petals.   I'm sure Jack Skellington would appreciate them.

Posted by SewCatSew at 10:27 PM No comments: