This year looks to be a Ratatouille themed birthday for #4.  Here's a look back at 3... 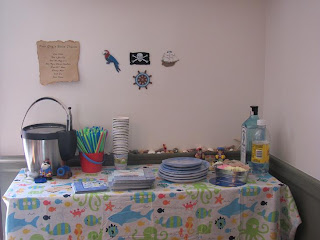 For our 'grog' I set up the buffet with a sea themed table cloth I got on super-sale at Target.  I made a menu on tan paper with a pirate-y font then ripped the edges and used brown chalks to get the aged effect.  The decorations on the wall are wooden pieces from JoAnn Fabric (50 cents each).  I scored the cups, plates and napkins at AC Moore for $1 a pack and the shells were $1 finds at The Christmas Tree Shop.  Colorful straws and a few pirate toys that we already had and viola! 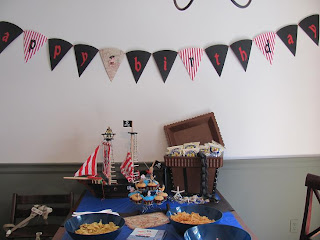 I made the banner using scrapbook papers and my Cricut cutter.  A little pirate from the 'Paper Dolls' cartridge separates "Happy" and "Birthday".  For the table I used a $1 plastic blue 'sea' and a scrap of leathery looking fabric, a map, a toy pirate ship and some $1 packs of sea shells. The chest is full of Pirate Booty snacks - YUM! 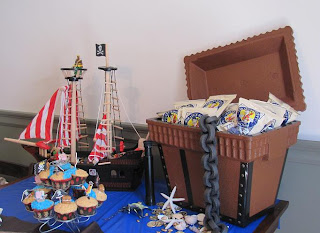 I made the treasure chest out of a cheap styrofoam ice chest.  I painted it brown with regular latex paint I happened to have around then added the 'straps' using electrical tape and some upholstery tacks that looked like hammered brass.  I lined the inside with a scrap of black silky fabric to finish it off.  I made the chains by slicing a foam insulation tube (92 cents at Lowe's) and linking together. 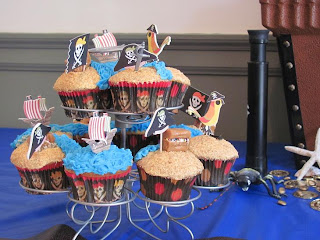 The cupcakes were a lot of fun - the liners and picks were a set from William Sonoma but could easily be printed and glued to tooth picks.  Some are all blue frosting for the sea and I did some with half blue "water' and half graham cracker crumbs for 'sand'.  The little treasure chest is a caramel - I cut the 'lid' off and shaped it a bit rounder then put some round sprinkles between the pieces to look like treasure. 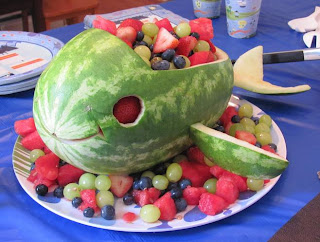 My husband did this fine watermelon whale sculpture.  My friends still talk about his talent. :-) 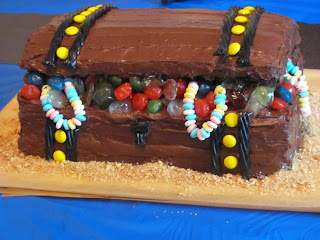 And of course the highlight of any birthday party is the cake.  I made the base with a layer of cake and a layer of brownie for stability.  The 'lid' is half of an open book shaped cake pan for the curve.  Old school chocolate frosting (not much into fondant) and licorice straps with M&M 'nails'.  The treasure is a combination of gushers fruit gummy candies that are jewel shaped, the candy necklaces and 'diamonds' I made myself with a gem shaped candy mold and clear sugar candy recipe.  I used natural parchment paper for the tray and sprinkled some raw sugar for the sand.

Outside we had a huge pirate mast made from PVC pipes, an old sail cloth shower curtain and a bushel basket for a crow's nest.  It didn't stay up too well but it was pretty cool - more engineering time required for that though.  We had out a steamer trunk for gifts and gave pirate 'kits' for the favors.  I made red velvet goodie bags with twine ties that I filled with pirate booty snack bag, pirate hat, pirate earring, spy glass, compass, gold coins and a custom made CD of favorite pirate songs.

And there you have it (mostly).  We actually had a family party AND a friends party so I made that cake twice.  This year's party is fast approaching.  We'll be doing a Ratatouille Movie theme so stay tuned to see what we come up with!
Posted by SewCatSew at 5:03 PM